A Brief History of Bacon

A Brief History of Bacon 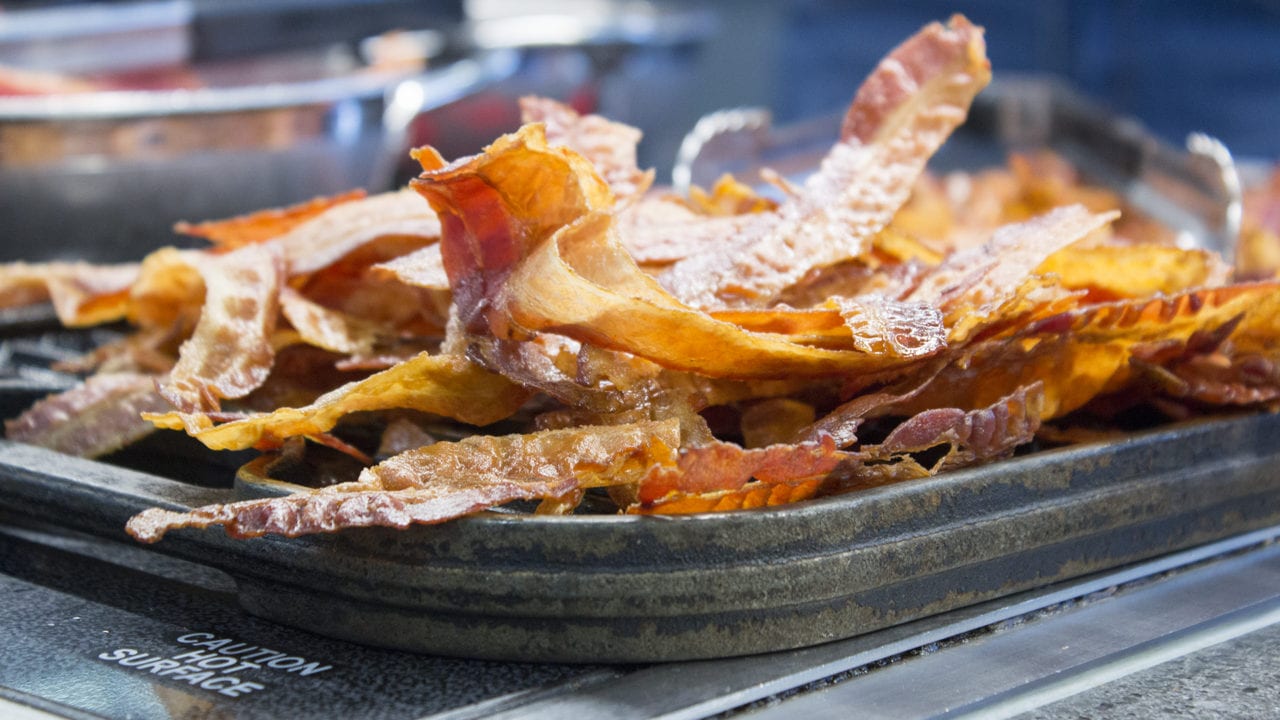 Bacon. It’s everywhere. On our pizzas, in our sandwiches, in our cereal. Okay, that last one may not be accurate now, but give it time. It’s in our lip balm, floss and potato chips. It’s the ultimate condiment and food-like substance which we will consume no matter where we find it. Even on top of ice cream. (Did I just invent the best ice cream topping? I think so.)

But just where did bacon come from? Was it handed down from the gods atop Mount Olympus, crackling from the torch of Prometheus? Was it created in a lab in the 19th century by some mad German doctor? Or did it come from the future, to save us from Tofurkey? (Side note: My spell-check doesn’t catch “tofurkey,” and that’s terrible.)

Well, before we learn about where bacon comes from, first we must define it. Bacon is cured pig meat, which can be prepared several different ways depending on the cut. Resources online tend to agree that cured meats have been around for thousands of years, starting in ancient China and stretching through the Roman empire. Cured meats were a staple of the peasant’s diet in medieval Europe. I found all this information through googling and reading Wikipedia articles, which source sites that in turn source more Wikipedia articles. Frustrated by this bizarre digital Moebius strip, I decided to pursue the truth by hitting the stacks of our own Georgia State University library.

Looking back, the wild pig was first domesticated 9,000 years ago in both China’s Mekong valley and Anatolia, in modern-day Turkey. Domesticated pigs first entered European markets from the Near East, but then interbreeding with wild European pigs, along with local domestication efforts, replaced those early bacon-providers. Genetic studies show a mix of wild and domesticated populations which have gone toward producing the modern European domestic pig, including imported Chinese pigs. The modern American hog owes a debt to both Christopher Columbus and Hernando de Soto, who independently introduced pigs to the Americas in the 15th and 16th centuries. These first pigs, along with the cows and other livestock brought to the Americas, furthered the devastation of native populations (including human populations) through their consumption of natural resources. Today, wild hogs run rampant throughout the American Southeast, giving rise to such legendary Pokemon as the late “Hogzilla” of Alapaha, Georgia.

According to Heather Arndt Anderson’s study of breakfast, doctors in the 18th century often recommended bacon for breakfast, alongside oatmeal porridge, fruit, buttered bread and a hearty cup of coffee (or tea or chocolate). The Industrial Revolution brought oranges and other citrusy fruits to the breakfast table, along with smoked salmon (for us lox-lovers). On the American West, she writes, “coffee, beans, cornbread, and bacon featured prominently.” Bacon has thus been a part of the breakfast table for almost the entirety of recorded history.

But what is the best way to prepare bacon? Well, there is the Canadian way, which is basically just fried ham, and there is turkey bacon — about which, the less said, the better. There is also Russian bacon called “salo,” which is made with little to no lean meat, consisting of cured slabs of fatback. The Italian lardo is sliced very thinly and is similar to salo in most respects. Italians also enjoy “pancetta,” which is cured but not smoked and often added to larger dishes. Pork belly is also common in the Far East, where it is known in China as “lop yuk.” Lop yuk is air-cured with soy sauce and other spices for almost two weeks before consumption. In Korea, bacon is known as “samgyeopsal-gui” and is neither cured nor smoked but rather grilled barbecue-style alongside vegetables and potatoes.

No matter how you slice it (heh heh), bacon has been with us for millennia and will most likely follow us into the deep future, when the sun grows to its red giant stage and swallows the earth like a giant, flaming Skittle. (Or a Red Hot, I guess.) But for now, while we still have today, why not head down to the dining halls and enjoy any one of our bacon-wrapped specials? Steak ’n Shake and Chick-fil-A both offer bacon as a condiment, as do our dining hall salad bars. Try some on your ice cream and thank me later.