Gathering of the Grills

Gathering of the Grills 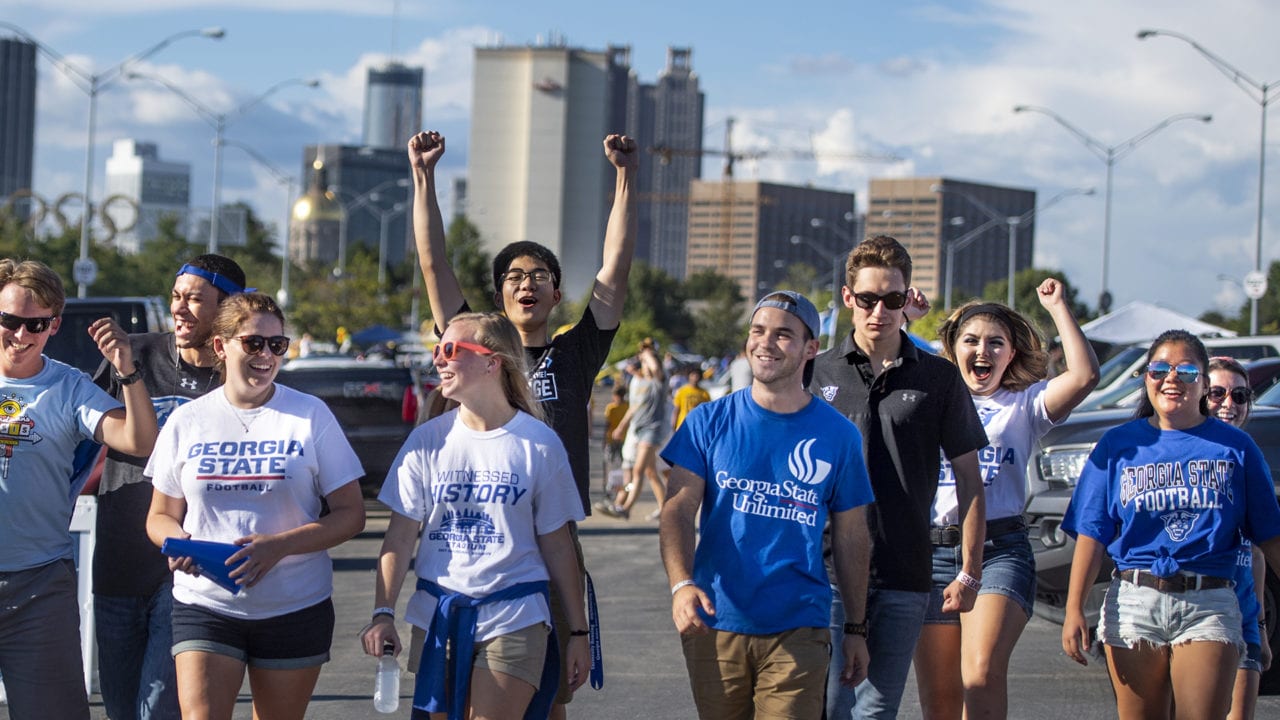 First Football Game, 2018 Students walking from the tailgate to the game

Autumn. The season of mists. That special, liminal time when the doors between worlds open and anything is possible. It’s in just this season that the great sport of football has its first stirrings. But between the first coin toss and the final countdown lies that most cherished and sacred of collegiate festivals: Homecoming. And what a coming of homes this year shall be. For when our blue Panthers go head to head with the Arkansas State Red Wolves, it shall be with the blessing of Patton’s Backyard BBQ.

What is a backyard BBQ? Well, it’s only the most splendiferous event of the fall. Seeking to top this season’s culinary triumph of King Neptune Night, our staff at Patton Dining Hall is organizing a night of food, fun and festivity. With ping pong and foosball and plenty of footballs to throw around, this year’s Backyard BBQ is sure to be a smash. As for food, the menu shall feature such tailgating mainstays as hamburgers and hotdogs, lovingly grilled outdoors on Patton’s patio. King of Pops is rumored to be making an appearance, so we have that going for us. Which is nice.

Some sources put our nation’s first tailgating experience at the Battle of Bull Run in 1861, while others insist on a less violent origin, saying it was at a Rutgers-Princeton football game in 1869. Whichever story is true, the tailgate really began to take off with the rise of the automobile, making possible a new age of mobile dining and gatherings of grills. These gatherings gained in popularity before really exploding in the 1980s and 90s with the advent of our region’s proudest culinary offering: the chicken wing. Yes, believe it or not, chicken wings were not always as lusted after as they are today. For centuries, the wing was cast off and discarded. After all, not a whole lot of meat on there. But starting in the 1990s, the idea of Buffalo wings took off until today you can’t hardly toss a football without knocking over someone’s ranch dip. No word yet on whether the hallowed wing of Buffalo shall grace us with its spicy presence, but I’m sure there will be plenty of tasty treats to tantalize our taste buds.

Homecoming has a similarly murky history as far as when the first one was officially held. Both the University of Missouri and Texas’ Baylor University claim to have held the first official homecoming game, in 1911 and 1909 respectively. No matter where the tradition started, it’s been a part of Americana since the early 20th century at least.

In a larger sense, October is a special time for colleges. Summer is gone and winter break is still a good way off. As the air cools, alumni show up to say hello to their old professors and awkwardly flirt with freshmen during frat parties. That happened to me once. It wasn’t weird at all. Of course, homecoming today is not what it was when I was in college. Indeed, back in those days you couldn’t just plug in an iPod or a Zune. We had to burn our CDs by hand, log on to Napster and all that. And we didn’t have flat-screens either, so when Sigma Nu wanted to show a horror film marathon of the Friday the 13th series, we had to watch it in regular old Standard Definition. Ah, I remember those days. No air conditioning in the dorms. Trying to dance with girls who were clearly not interested. Drinking lots and lots of soda. No lie, October is a time for memories. It’s no wonder that colleges encourage alumni to visit campus, if only to encourage them to donate to the latest capital campaign.

Homecoming this year should prove equally exciting. With a parade and a ball on Thursday, alumni awards and a block party Friday, and the big game itself on Saturday. Together with Homecoming Court announcements and the alumni tailgate, this year’s events are jam-packed with more food and festive fun than you can shake an oversized turkey leg at.

The bash is scheduled to begin this Wednesday at 4 p.m. So, come early, stay late, bring a friend. It’s going to be a smash.