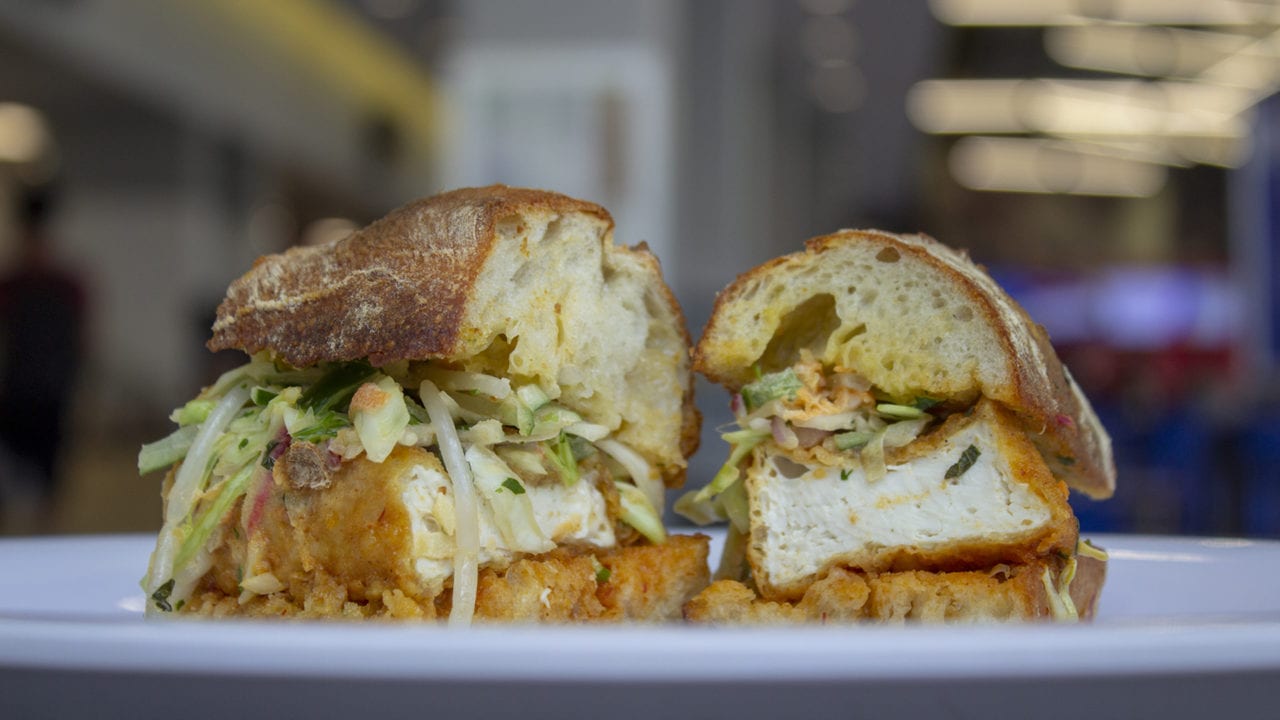 Food Management magazine recently put out a call for new and daring sandwich creations. One of the brave heroes who answered that call was Piedmont Central’s very own sous chef Rory Wood. His tofu banh mi was featured in their September issue, alongside such greats as a smoked roast beef with spicy cheddar and an Indian curry zucchini and carrot fritter. Rory’s creation features fried tofu, Asian slaw, and a sesame-chipotle ponzu sauce, all on a toasted baguette. A true triumph in the long history of the sandwich.

Perhaps there is no food so elegant in its simplicity yet so perfect in its design as the sandwich. Most historians assign the invention of the sandwich to the 4th Earl of Sandwich John Montagu. A notorious gambler, he wanted something to eat that wouldn’t necessitate his leaving the card table. As Grubhub wasn’t available, he asked a servant to bring him some meat between sliced bread, and the others around the table asked for “the same as Sandwich.”

But surely there is more to this story? After all, plant and animal domestication first took humanity by storm about 10,000 years ago. Is it not entirely possible and likely that some early Mesopotamian crammed a hunk of freshly-charred goat between a couple slices of ancient grain?

Back in July of 2018, researchers from the University of Copenhagen found evidence of hunter-gatherers cultivating ancient cereals to make flatbread over 14,000 years ago. This would put the invention of bread some time before the invention of farming. If bread is older than domesticated animals, perhaps it’s not too far-fetched to picture some ancient hunter wrapping his most recent kill in flatbread. Of course, a meal like that would more closely resemble a burrito than a sandwich.

People all over the planet have been combining meat, vegetables and bread since the first hunter-gatherers speared boars on the African savannah. There’s the banh mi of Vietnam, the bean sandwich of Senegal and of course, the falafel of Israel. No matter where you look on this planet, you’ll find someone wrapping something in a flatbread, slapping something between two slices or making some sort of meat pie (which is just this side of a hamburger, but I’ll let it slide). But do all these combinations qualify as sandwiches? Obviously, hotdogs aren’t sandwiches, but where is the line, exactly?

First, we must consider that every good definition must be adequately narrow to separate the meaning of one word from another. Perhaps we must consider in our taxonomy placing “bread-and-something” at the top and all the various wraps, sandwiches and open-face flatbreads descended therefrom. After all, if we apply the definition of sandwich too loosely, we’ll wind up calling cheese and crackers or Oreo cookies “sandwiches,” and that’s just ridiculous.

The quality of any good sandwich is determined by the filling. A good slice of tenderloin can overcome even the papery dissatisfaction brought on by Ezekiel bread. Toppings and condiments must also be considered. Lettuce and tomato are staples of the American hero sandwich, though some would argue that lettuce adds nothing save texture, and even that is negligible. The debate between mayonnaise and mustard rages onward, though mixing the two can create a unique taste challenged only by introducing ketchup, as well. Thousand Island dressing, ranch dressing, or chipotle ranch dressing can also be used as proper condiments, not to mention spicy brown mustard. But now we’re just listing items.

Proper bread is equally important. We must make sure our sandwich has adequate structural integrity. There’s nothing worse than a sandwich that’s falling apart before the first bite. It almost tempts us to eat it with a knife and fork, turning the sandwich into nothing more than a salad. That simply won’t do. Types of bread are almost limitless, though remember, a tortilla would be disqualifying. After all, we’re talking sandwiches, not wraps. Gyros, then, would also not be considered sandwiches, nor would lettuce wraps.

So, these are the elements which make up a sandwich: bread slices with something in between. The filling can be meat or vegetable-based. Egg salad sandwiches count, as well. There ought to be some sort of topping or condiment, but these are not necessary to qualify. If you really want to eat turkey breast with no mustard on whole grain bread, knock yourself out. If you’d like to try a sandwich with some actual taste, I would suggest heading down to Piedmont Central and seeing if Rory can fix you up something scrumptious.