Most Wonderful Time of the Year

Most Wonderful Time of the Year 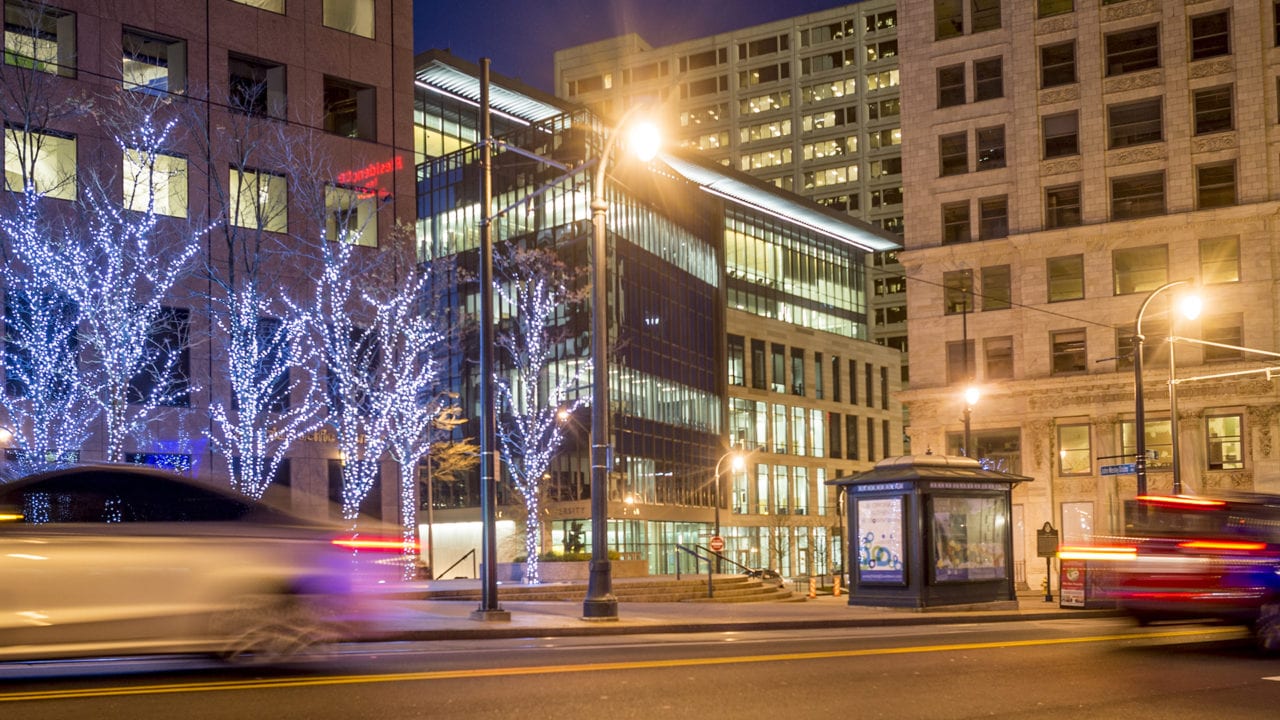 Trees with lights outside the GP Building, with the Law Library in the background.

The smell always comes first. Every year, without fail. The smell of smoke in the air. That’s the smell of autumn. It’s how I know the holidays are close. It usually starts in October or late September. Right around the time it starts getting cool, and we start putting the heat on in the mornings. Before you know it, it’s November, and the heat is on every day, and the smell is gone, but by then it doesn’t matter. You’re in the thick of it. The holidays are practically here.

I remember as a child, visiting the mall and seeing statues of angels playing around a vast garden. I pretended they were snow fairies, sent from some bygone realm. Messengers of something or someplace or sort of feeling I still can’t quite put into words. It all changes as you get older, of course. The magic fades a bit, the colors grow just a little tackier. Just a little too bright. But then you realize that things aren’t fading. They’re deepening. The colors growing richer, the smells stronger.

Love and joy and friendship and family. That’s what the holidays are. A willful attempt to drive back winter’s cold and dark with the light and song of the human spirit. It finds its expression in a million ways, across a million different cultures. For me and my family, it finds expression in the season of Christmas. Fun fact: For the first 300 years, Christians didn’t observe the birth of Christ with any special significance. The dates of his baptism and death were given far more significance by the early Church. It wasn’t until the time of Constantine that Christmas became celebrated. Even then, it was unrecognizable to how it’s celebrated today.

In medieval and Renaissance times, Christmas was celebrated with drinking and revelry. That’s where “wassailing” comes from, the practice of drunkenly parading through town with song. The vast amounts of drinking and debauchery which took place over early Christmas celebrations was most likely a holdover of the old Roman festival of Saturnalia, a time of feasting and gift-giving. Christmas was considered such a rocking holiday that of course the Puritans forbade it in the 17th century. This proud tradition of being a bummer around the holidays is continued by people who insist on giving children socks for Christmas.

Hannukah, the Jewish festival of lights, generally falls around Christmastime. This year it stretches from before Christmas Eve to just before New Year’s. Hannukah commemorates the victory of Jewish forces over the Greek occupants of Israel during the second century B.C.E., along with the rededication of the holy temple. Much like Kwanzaa, Hannukah is celebrated worldwide by members of the Jewish diaspora and is a national holiday in Israel. This festival is often seen as in competition with Christmas, but really it has a spirit all its own and deserves a place of its own in the Grand Forest of Holidays. You know. The place holidays come from? Nightmare Before Christmas? Anyone? Bueller? Is that reference too old?

Meanwhile, Diwali is the Indian festival of lights which commemorates Rama’s victory over Ravana. I won’t get into all the particulars of the story here, but do yourself a favor and check out the Ramayana at your local library or bookstore. It’s a fascinating read no matter your belief system. Much like Hannukah, which lasts over a week, Diwali takes place over a period of five days. Like the other autumn/winter festivals, this celebration includes feasting and intricate decorations. Diwali follows the Hindu calendar, but in Gregorian terms, it usually falls somewhere between late October and early November.

While Diwali is celebrated by many folks of Indian descent, Kwanzaa is practiced by members of the African diaspora worldwide and commemorates the traditional time of harvest with, you guessed it, lights and feasting. Kwanzaa follows the Gregorian calendar, always falling between December 26 and January 1. One of the youngest of the autumn/winter holidays, Kwanzaa focuses on seven key ethical and social principles such as faith, unity and purpose. The holiday was designed in the 1960s as a way for African Americans to build community and civic pride.

Muhammad’s birthday was just celebrated a couple weeks ago, though the precise date varies depending on if you’re Sunni or Shia. Celebrations include fasting and prayer, but the variety of celebrations can vary depending on what part of the Muslim world you’re in. Much like with Christmas. Now sometimes Eid-al-Adha falls closer to autumn. That’s the Muslim Feast of Sacrifice, commemorating Abraham’s near-sacrifice of his son Ishmael. Halal animals are still sacrificed to this day for the feast, with much of the meat going to the poor so that all may partake.

But what the holidays mean to me — midnight mass, seven fishes and egg nog — may be different for you. Whether you celebrate Diwali, Hannukah, Eid-al-Adha, Kwanzaa, Christmas or any of the numerous other autumn and winter festivals worldwide, we here at PantherDining are excited and pleased to celebrate with you.

In that spirit, Piedmont Central will be pulling out the stops to bring you a rustic holiday feast this early December. The menu will consist of carved turkey and roast beef, collard greens and other Southern-style fare, and every type of cookie, gingerbread or otherwise, that you can imagine. With plenty of holly, bells and other decorations to give us that rustic feel right before the holidays.

Then right before finals, Central will be at it again, bringing you an excellent destress event designed for ultimate relaxation. It will be a week of fun and leisure, with casino night, arts and crafts, yoga and a host of other activities designed to stimulate and relax the brain. Will there be midnight breakfast? Who knows? I know that’s what we did at my alma mater, and it was always a hit. I remember staying up late studying then going to stuff my face full of grits, eggs and sausage, served by volunteer classmates giving the cafeteria staff a hand. Of course, this was all long ago when the world was filled with magic and light.